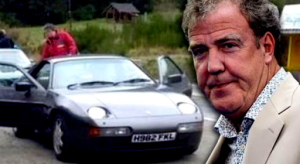 Top Gear crew gets stoned out of Argentina!

The Top Gear brand – personified by that all-around good guy and master of international diplomacy Jeremy Clarkson – has taken another hit.

Well, a shower of stones, to be exact.

If you haven’t seen the news, the 1991 Porsche 928GT coupé being roadtested by the crew of BBC juggernaut ‘Top Gear’ was stoned by hostile locals while filming in Argentina.

Why? Because the car had offensive numberplates.

The plates contained an unfortunate combination of words and numbers indicating the year of the Falklands War/Guerra de las Malvinas ([1]982) and a contraction of ‘Falklands’ (FLK). With the war and the naming of the island group still a deeply sensitive issue in Argentina 32 years on, the numberplate was interpreted by locals as a deliberate jibe.

The incident speaks volumes about the importance of doing your homework about the geopolitical, social and economic environment that you’re working in – and the signals you’re sending out when there. You’ll be watched…and judged.

The stones caused significant damage to the Porsche, Lotus and Ford Mustang used by the show’s hosts and the shaken crew abandoned the cars on the road between Tolhuin and Rio Grande. The filming was cancelled and the crew fled Argentina to Punta Arenas in Chile.

The stoning was the latest in a series of incidents over recent years which have soured the once phenomenally successful Top Gear brand almost to the point of permanent toxicity, mostly as a result of insensitive or downright offensive comments made publicly by lead presenter Jeremy Clarkson.

The incident is also a sharp reminder about the care you need to take when going about your business – and leisure – in different cultural contexts. You will often be affronted by approaches that clash with your own values. You will be unaware of the hidden contexts for much of what you see and hear, both in the office and out and about.

And often you’ll be unaware of the cultural subtexts of your conversation. The language you use can be an unexpected minefield and you need to be switched on and sensitive – even about something as deceptively simple as place names. Here, what the English-speaking diaspora calls the Falkland Islands is known as las islas Malvinas in the equally geographically sizeable Spanish-speaking diaspora.

Have you unintentionally caused offence to professional counterparts in different cultural settings because you failed to do your background ‘homework’ and stay informed?

Or have there been times when you’ve had to think especially carefully before speaking or acting?

You may be putting your own and your organisation’s reputation at risk if you fail to understand the signals you may be giving by the opinions you express in a given setting, the clothes you wear, your body language and even – as in this case of unintended consequences – your vehicle’s signage.

And if you think that your universalist approach on social values and human rights somehow gives you diplomatic immunity, then think again. You could have your passport cancelled, your visa revoked and a black mark against your and your company’s name.

The Top Gear stoning incident illustrates the fragility of reputation, of which Top Gear has wilfully squandered an enormous amount. Any inadvertent mistakes made by Top Gear or its presenters are increasingly unlikely to be forgiven as cultural blundering.

And with almost permanent brand toxicity and costs associated with misadventures like these, the future of the Top Gear juggernaut is looking doubtful.